Two Weeks in a Sufi Monastery in Istanbul

Testimony of an almost forgotten time

The rediscovery of this book in which the author, the Danish publicist and anthroposophist Carl Vett, is telling of a forgotten time is a lucky coincidence.

“In 1925 I was in Constantinople, and was, so it was generally said, the first non-Mohammedan to be allowed to live for a time as a dervish in a Sufi monastery … Many years of study had made me familiar with the phenomena of psychic research, and I wanted to observe at first hand the ecstatic states attained by the dervishes in their way of initiation — for the dervish orders of Islam are schools of initiation.

Before and during my stay with the dervishes I kept a diary. It was not intended for special publication, but in view of the execution of twenty-nine men, most of whom were sheiks or members of the Naqshbandi order … it has seemed that these experiences might be of more general interest; and so I have decided to offer them to the public.”  (From the author’s foreword)

Even now, more than 70 years after its initial publication, this book is a valuable read for anybody interested in the Islamic aspect of the mystical heritage of mankind. 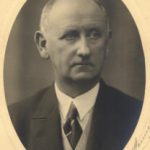