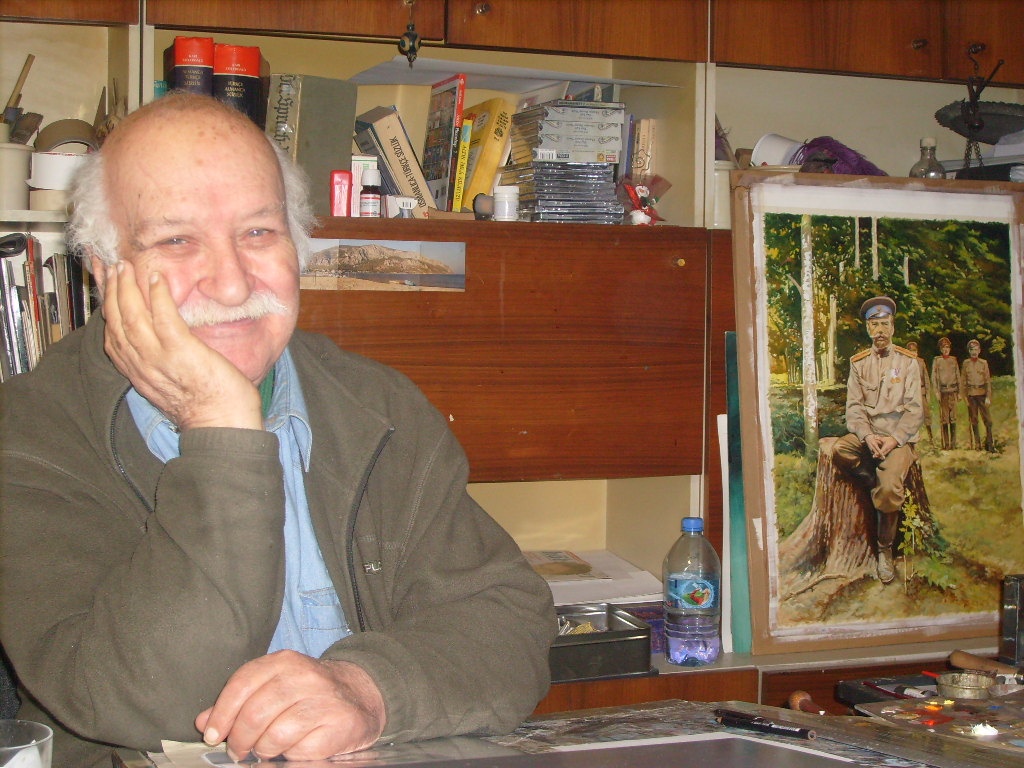 I met him in April 2007 on the occasion of two book cover designs I commissioned to him. I visited him in his Munich studio at Grimmstrasse 5 which seemed unchanged for probably forty years and breathed the charm of this tirelessly working artist who had aged along with his environment. The studio was located on the ground floor („first floor“ by American reckoning) and I believe Mr. Askin lived on another floor of the same building .

After the welcome, the first thing to do was to make friends over a few sips of whiskey – at around 11 a.m., if I remember correctly. Although I didn’t drink at that time, I nevertheless toasted with the master, who always had a cigarette in his mouth or waiting in the ashtray.

Upon my inquiry, Mr. Askin explained that his name was actually Aşkın – pronounced „Ash-kn“ (the small i without a dot remains unvoiced). The name means „Your Love“: aşk = love; the ending ın is the suffix indicating the second person singular, you.

Born in Istanbul in 1924, he had lived in Munich since the late 1950s. His German was good, but he spoke with a strong accent. Later, when we spoke over the phone, I sometimes had trouble understanding him. I remember his not very deep, raspy voice and his slow but amused way of speaking.

Soon we were discussing the content of the two novels to determine the motifs for the cover design. He wanted to know everything in great detail, the plot, the relationship between the characters, and where the stories were set. There was an oil tycoon in a top hat, a gray eminence, a foreign princess, the Eiffel Tower, Big Ben, the Baku oil fields, and finally a vintage car in which the princess drives around Paris with her lover who wears a fluttering white scarf.

Askin explained his working method to me: He spent hours looking through old illustrated magazines, catalogs and coffee-table books to find suitable models. As he told me later, he had based the princess’s appearance on an old photograph of the actress Lilian Gish. Either the gray eminence or the petroleum magnate (I don’t remember correctly) was modeled after the gentleman from the Dujardin brandy advertisement (very popular in Germany a few decades ago). The car mentioned in the novel, an Amilcar, was easy to find.

The arrangement of the figures and other motifs give proof of Askin’s mastery.

After the first sketches, he then painted with watercolors in aquatint technique. His originals are 31 cm wide, 46 cm high (the actual painting) on a slightly larger sheet of paper.

The second painting he did for me was for Essad Bey’s pulp novel „Manuela“. It’s partly set in Portugal and the author took up the counterfeiting scandal that occurred in the 1920s. At that time, a certain Alvez dos Reis had succeeded in convincing the London banknote printers Waterloo & Sons that he was to order 200,000 bills of 500 escudos each on behalf of the Banco do Portugal. So we know what these bank notes looked like. You have to see how ingeniously Askin reproduced it for the book cover (see below).

Further, I commissioned him to do two „vignettes,“ the nearly half-page-sized drawings found on the first page of a pulp novel. In the case of Essad Bey’s novels, these are Lisbon and the port of Batumi (Georgia).

The original paintings and drawings described here (covers and vignettes) hang at the walls of my office and I am very proud to own them. I am also in the possession of two other paintings: finished but unused book covers, and some preliminary sketches that Mr. Askin had sent me.

In retrospect, I am very glad and proud that I was able to meet this great artist, a true grandmaster of pulp novel design.

I took a photo as a souvenir. In the background you can see Askin’s painting of the well-known photograph on which Tsar Nicholas II is sitting on a tree trunk in forester’s uniform.

A nice obituary can be found here (in German): http://www.comic-report.de/index.php/news/61-restinpeace/179-gestorben-firuz-askin

Also don’t miss to visit Mr. Askin’s own website, which thankfully is still hosted and is in English! http://www.firuz-askin.com/biography